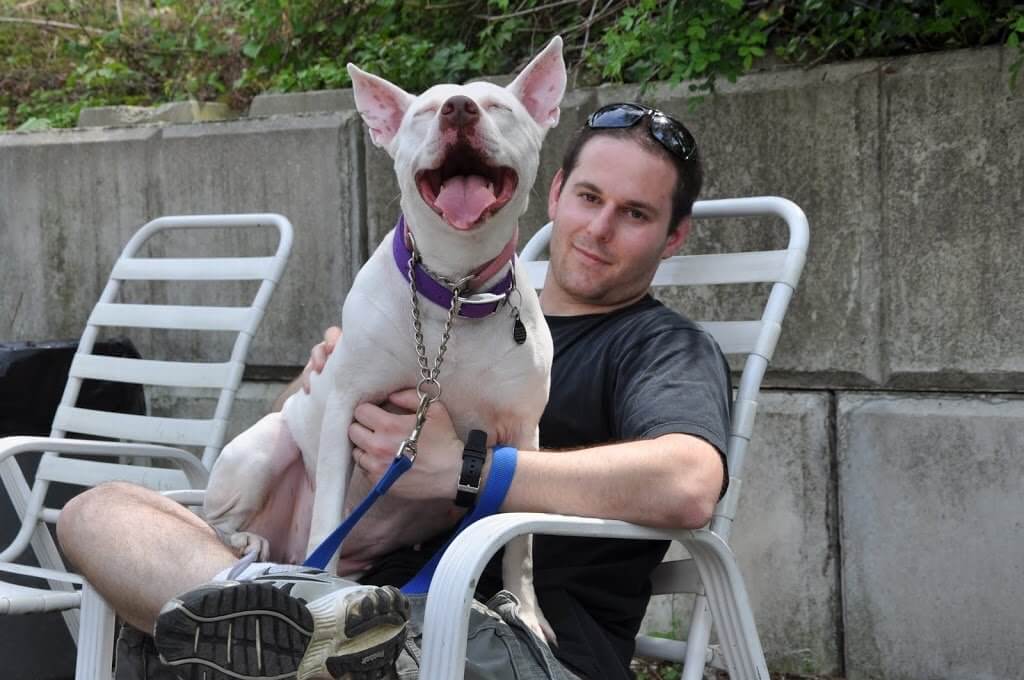 We feel it's only appropriate to christen our blog with the story of one of our most favorite and memorable animals, Scarlet, a white Pit Bull mix that you often could mistake for a pig with the pink pigmentation of her skin and triangular, oink-like ears.

(Scarlet looking like a pig with her former foster daddy, Micah)

Scarlet entered the Adoption Center as a stray in early December of 2010. She was underweight and most likely over-bred. Sadly, a common sight for a lot of the Pit Bulls that find their way to us. At first, she was scared, and then she got to not liking dogs because of all those darn dogs she had to share her living quarters with in the dog kennels, but boy did she blossom when she went to outreach events. She loved kids!

Day after day in the kennels, she went overlooked, if you can believe it, even with that pink skin and those tall ears. Day after day, her kennel mates got adopted left and right.

Months passed. Canine girls like Scarlet, that spend months of their lives in a dog kennel, albeit it with peanut-butter filled Kongs and daily romps, deteriorate mentally, and often physically. They go, as we call it “cage crazy.” And it breaks our hearts.

But not this survivor. In the face of time she stared and only seemed to get better, instead of worse. This is thanks in part to the fabulous foster home she was welcomed in to as she continued to wait for her furever home where she socialized with other dogs and became dog friendly again. And then we met some wonderful people who do wonderful things to promote the Pit Bull name and dash those nasty rumors–an organization called Heart from the Heartless. They wanted to sponsor Scarlet's adoption fee in hopes of helping her find her a furever home.

And then there was a blogger named Nick who came in to the Adoption Center monthly to write about a dog and showcase it on his blog, Doggie Diaries 4 U. In late February, he featured Scarlet. And Nick couldn't stop thinking about her. We didn't blame him.

Well, as Nick says, he broke his own rule. His informative blog turned personal. After a very successful meet-and-greet between Nick's dogs and Scarlet, Nick adopted Scarlet–for no fee, thanks to those wonderful people from Heart from the Heartless.

Here she is with one of her new dog siblings.

And there she is frolicking. Living the life we always hoped she could live, the one she always deserved. Even if it took her five months to find it. What's that saying? It took a village? We speak for all parties involved when we say we were happy to oblige.

Adopted one of our amazing animals and you want to share your happy tail? E-mail a photo or two and the story to Justina at jcalgiano@delcospca.org.