From Smedley Park to Central Park 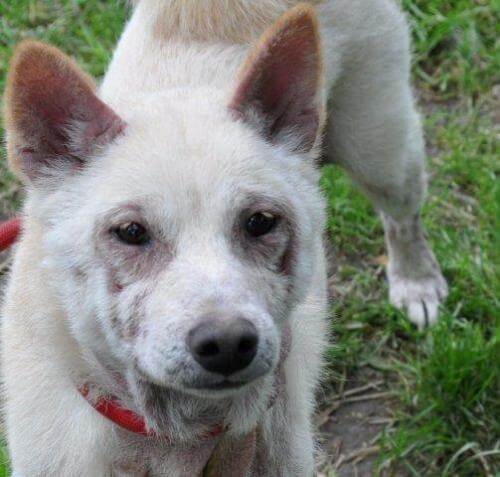 Hey furry lovers. Sorry its been a while. But, we promise it'll be worth the wait. And we promise to write more often.

We had to hear this Cinderella-esk happy tail over and over again–because it seemed too good to be true, and because it's one of those stories that makes you feel a rush of happiness every time you hear it.

He has an itchy skin condition called mange.

He was found roaming alone in Smedley Park. That's how we got his name. We know, genius, right? (:

Smedley, a Shiba Inu, was treated right away by our Isolation department, headed up by the one and only Nicola.

This is Nicola (ain't she cute?) lovin' on another pooch with another sad–>happy story:

Smedley sat in his kennel for a while, very available for adoption with the mange under control and non-contagious while on his medication, with many passersby turning up their noses at his patchy face and coat.

We knew there had to be a little spot in the world for Smedley, and it wasn't Smedley Park.

So we called up the animal rescue called Lawyers in Defense of Animals on Behalf of Shiba Rescue of Ocean County, NJ, and they said they'd love to have our Shiba Smedley boy. So off he went.

And boy did he enjoy his time:

And how about that fur?! Obviously New Jersey was good for him.

A couple weeks went by with us checking in on our buddy regularly until last weekend when we got the news that Smedley had been adopted! By a young attorney. Who lives in Manhattan, off Central Park.

Wait. It gets better.

Jeff, Smedley's new owner, already owns a male Shiba Inu named Kenji that he adopted while he was living in Japan (where the Shiba originated from). Kenji also had mange. Jeff had been looking for a playmate for Kenji since he adopted him 3.5 years ago. When Jeff heard about our Smedley and his skin condition…and then traveled to meet him with Kenji in-tow, it was like deja-vu, and he knew Smedley was for him.

We like to think Jeff and Kenji were Smedley's Prince Charming(s) and Central Park, his new castle.

He's pictured below in that said castle…In Kenji's bed. (: