Donations Needed to Care for Dog with Lacerated Neck 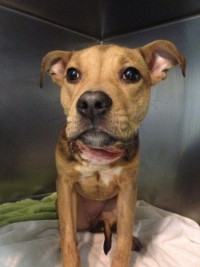 Providence Animal Center staff are caring for a dog who was found with a severely lacerated neck in an Upper Darby home.

A 6-month-old small female Shepherd-Pit Bull Terrier mix that Providence Animal Center staff have named Clover was found in a home on Clover Lane. Clover is believed to have been in the home for 3-4 weeks tethered to the banister with a cable wire, which she ultimately chewed herself free from, but not without severe lacerations.

“We’re lucky that she didn’t decapitate herself, starve to death, or both,” said Ron Riggle, Humane Society Police Officer, and Clover’s rescuer, who is actively investigating Clover’s case to prosecute the person responsible for the cruelty.

She will need multiple follow-up procedures to repair her destroyed neck muscles. She is currently under the care of Providence Animal Center’s Director of Shelter Medicine, Dr. Kim Boudwin, who will perform the surgeries. Clover’s care is estimated to cost over $3,000.

A female cat who Providence Animal Center staff have named Charmer was also pulled from the home. Aside from being under-weight, Charmer did not suffer any injuries.

Clover’s disposition is as if nothing is wrong.

We are requesting donations for the care of Clover. Donations can be made by clicking here  or mailed to Providence Animal Center at 555 Sandy Bank Road, Media, PA 19063.