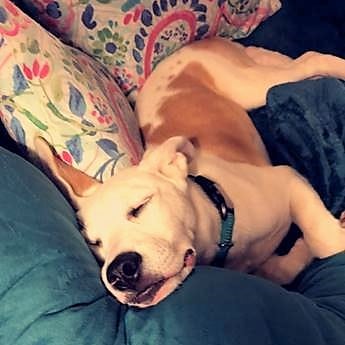 We want to make sure that the new pet’s transition into the home is as welcoming as possible, while at the same time trying to make sure that our resident pet is not made unhappy by suddenly needing to share their space and resources.

For some, the adjustment period can be a matter of days, and for others it could be weeks – or even longer – before everyone feels fully acclimated! No matter how long it takes though, the end result makes it all worthwhile.

“Cooper (previously Danny) has been settling very nicely into our home! It will officially be two weeks tomorrow since he became a part of our family.  Cody (his older brother) struggled a bit for the first few days, but they are becoming fast friends.

Cooper is very smart, and we accomplished potty training in just four days! We still have the occasional accidents but overall he is doing great. We spend lots of time at the dog park, on walks, and daycare to burn off his puppy energy and he has found his favorite chair to snuggle up in after a long day. We have loads of toys, treats, and bones in the toy bin for Cooper to chew on, but his all-time favorite item is the tennis ball. He can play fetch for hours! While Cody & Cooper had a bit of an uncertain start, they are now doing great together and even snuggle sometimes! We have started some training classes through Perfect Pooch so we’re hoping to tackle some new tricks soon.

Here are some photos of Cooper during his first two weeks with us. I am thoroughly enjoying spoiling him 🙂 Thanks for all you do!”

Thank you (and Cody!) for welcoming Cooper into your home and your hearts! 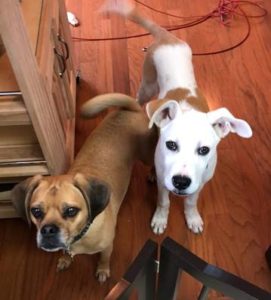