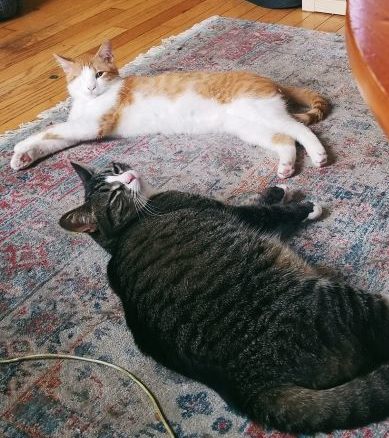 Adoption is incredibly exciting for both humans and animals, but adoption can be stressful too. Many of the pets at PAC have traveled hundreds of miles to get here. Some may have lost a home they loved or were removed from an unfit environment.

When we bring our newly adopted pets home, we then ask a lot of them; we ask them to come live in a place they have never been with people they have just met. We ask them to adjust to our lifestyles and to call our house their home before it feels like a home to them. All of this work is mentally taxing on a new pet, and the stress they feel can cause a pet to act out while trying to navigate their new environment.

When you have just adopted, it is easy to accept your new furry friend into your home, but it will take longer for your new pet to make the transition and become comfortable in their new environment. Using — or not using – a decompression period can make the difference between a good or bad transition.

One family in particular who made great use of a decompression period recently adopted a kitty companion named Carl.

“Hobbs is doing great. I actually ended up renaming him Carl.

It's been a little over two weeks since I adopted him, and he has been slowly but surely adjusting to my home. After speaking with the people at Providence about him and his temperament, a longer adjustment period was expected. Though slow, I have been pleasantly surprised by the pace at which he is progressing.

When he first arrived at my house, he ran right under my bed and rarely came out. We soon found out that even when a bit uneasy in a new place, Carl could not resist play time. We tried to play with him often to get him more comfortable around us and in the house. After spending a few days in my room as his “basecamp,” it was obvious that he was curious about what was going on outside my room. We let him out of my room and introduced him to our other cat, Tallis, after about a week. She wasn't too thrilled about him moving into her space at first, but she quickly got over that. Carl, even when Tallis was being nasty in the beginning, showed no signs of fear. He clearly just wants to be her friend! Now Carl spends most of his time exploring the common areas of the house.

Our other cat has quickly begun to love having another cat around. She and Carl love playing together, in fact, Carl loves playing with her so much it might get on her nerves sometimes… but that is expected with him being young. Carl is still very nervous around people, but he has been making progress in that area as well. He will now take treats from my hand, but still tends to scatter and hide when anyone walks near him or attempts to pet him. As of late last week he hasn't been scattering as much as he used to and will often lay out in the open, showing signs of trust. We can tell that he likes to be around people and with time I feel he will come out of his shell even more. Considering we are only about two weeks in, I see a bright future for him in our home!

Thank you to everyone at Providence who told me that he just needed someone to give him a chance and work with him.”

Thank you for allowing Carl every opportunity to thrive in his new environment – we can tell he is in great, loving, hands in his new forever home! 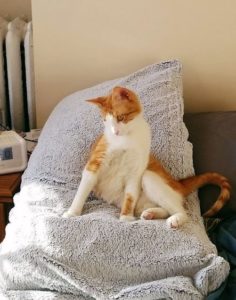